How did the social safety net turn into a poverty trap? It was a victim of the success of the job as an economic force.

Psychologists call it “the success delusion.” You do something and get a result you like, so you keep doing it, expecting more of the same. It keeps working until one day it doesn’t. Do you try something new? No, you double down — it worked before, surely it will work again. You keep doubling down until you’ve made a mess.

You’re a victim of your own success. If you could listen, hindsight would tell you that there was more to it than what you were doing, that a lot of what happened was you being in the right place at the right time. You might believe that or not, but what matters now is that the times changed and you didn’t.

That’s what happened to social welfare. 40 years of post-WWII economic success positioned the steady job as the cornerstone of economic prosperity and upward mobility. Then, in the 80’s and 90’s, about the time the job was starting to lose its economic vitality, policy-makers doubled down on it:  work had raised the welfare of the whole world since the days of the telegraph and railroad, and surely it was still the best route out of poverty. So now we had workfare instead of welfare, and, as we saw last time, social welfare became “a system of suspicion and shame.” 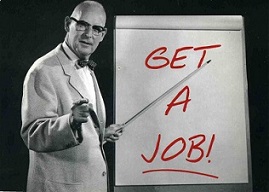 Standin’ in line marking time
Waiting for the welfare dime
‘Cause they can’t buy a job
The man in the silk suit hurries by
As he catches the poor old lady’s eyes
Just for fun he says, “Get a job.”

“That’s The Way It Is”
Bruce Hornsby and the Range

Rutger Bregman sums it up this way:

“We’re saddled with a welfare state from a bygone era when the breadwinners were still mostly men and people spent their whole lives working at the same company. The pension system and employment protection rules are still keyed to those fortunate to have a steady job, public assistance is rooted in the misconception that we can rely on the economy to generate enough jobs, and welfare benefits are often not a trampoline, but a trap.”

Guy Standing explains it this way:

“The period from the nineteenth century to the 1970’s saw what Karl Polanyi, in his famous 1944 book, dubbed “The Great Transformation.”

“The essence of labourism was that labour rights — more correctly , entitlements — should be provided to those (mostly men) who performed labour and to their spouses and children.

“Those in full-time jobs obtained rising real wages, a growing array of ‘contributory’ non-wage benefits, and entitlements to social security for themselves and their family. As workers previously had little security, this was a progressive step.

“The labourist model frayed in the 1980’s, as labour markets became more flexible and increasing numbers of people moved from job to job and in and of employment.

“The shift to means testing was fatal. As previous generations of social democrats had understood, benefits designed only for the poor are invariably poor benefits and stand to lose support among the rest of society.

“Ironically, it was mainly social democratic parties that shifted policy towards workfare, requiring the unemployed to apply for non-existent or unsuitable jobs, or to do menial, dead-end jobs or phony training courses  in return for increasingly meagre benefits.

“Today, we are living in a Second Gilded Age — with one significant difference. In the first, which ended in the Great Crash of 1929, inequality grew sharply but wages on average rose as well. The Second Gilded Age has also involved growing inequality, but this time real wages on average have stagnated or fallen. Meanwhile, those relying on state benefits have fallen further behind, many pushed into homelessness, penury and dependence on inadequate private charity.

“Since the 1980s, the share of income going to labour has shrunk, globally and in most countries of economic significance… The labour share fell in the USA from 53 per cent in 1970 to 43.5 per cent in 2013. Most dramatically, it slid by over twenty percentage points in China and also dropped steeply in the rising industrial giant of South Korea.

“Besides falling wages, there has been an increase in wage differentials and a less-documented decline in the share of people receiving non-wage benefits, such as occupational pensions, paid holidays, sick leave or medical coverage. Thus worker compensation, in terms of ‘social income,’ has fallen by more than revealed by wages alone.

“As a consequence of these developments, ‘in-work poverty’ has rocketed. In some OECD [Organisation for Economic Cooperation and Development — 34 industrialized member countries], including Britain, the USA, Spain and Poland, a majority of those in poverty live in households where at least one person has a job.

“The mantra that ‘work is the best route out of poverty’ is simply false.”

The Corruption of Capitalism (2017)

Not only are jobs doing a poor job at social welfare — for both employed and unemployed alike — but they are themselves an endangered species. More to come…

Kevin Rhodes draws insight and perspective from his prior career in law, business, and consulting, from his studies in economics, psychology, neuroscience, entrepreneurship, and technology, and from personal life experience. View all posts by Kevin Rhodes

One thought on “The Success Delusion”

This site uses Akismet to reduce spam. Learn how your comment data is processed.

Follow The New Economy and the Future of Work on WordPress.com