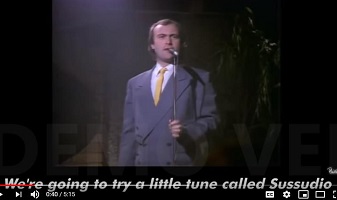 Fast forward 34 years to a new tune:  “Su-su… socialism.” Just say the word, and it’s an instant failure to communicate. The Millennials get up and dance. Their parents think about re-writing their wills.

I found all the sources for this week’s post by Googling “when did socialism become a bad word?” This article[1] has that title, and gives two answers. The first is the word’s historical definition:

“a stage of society in Marxist theory transitional between capitalism and communism and distinguished by unequal distribution of goods and pay according to work done.”

The second answer is also historical:  to the older generation, socialism means the Cold War, the Commies, and the other nasty stuff in this  video. (It’s short — again, we’ll wait if you want to take a moment to watch it.) 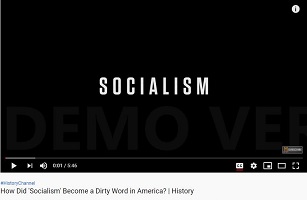 “Socialism” sets off alarm bells for those who lived through all that:

“For a generation with no memory of bomb shelter drills or sledgehammers smashing the Berlin Wall to pieces, the sad reality of life under socialist rule has been forgotten, and the lessons of the Cold War have been relegated to the ‘ash heap of history’ alongside communism. Instead, the concept of socialism has often been confused with liberalism. Socialism seems like a fine idea that means a more social equitable society for everyone—free health care and free education for starters.

“Socialism is not roads, welfare, and free education. Socialism has always had a more ominous goal and shares close historical and ideological connections with more reviled terms: Marxism and communism. Karl Marx took socialism to what he viewed as its natural conclusion: The ‘abolition of private property.’”

How Did America Forget What ‘Socialist’ Means?  Politico Magazine (March 22, 2016)

But the new version of socialism isn’t about state-owned means of production,[2] the abolition of private property, or a Communist revival:

“For conservatives and libertarians, the news that millennials are embracing socialism is frightening. They shouldn’t fear, because the United States is not going to nationalize the economy any time soon. That’s because the word “socialism” doesn’t mean what our newfound socialists use it to mean.

“To people who don’t like it, socialism means ‘state control over the means of production.’ Turn to your nearest dictionary and you’ll find something like that. But it means something different to the people who use the term as a positive thing. Your coworker’s son who wants to take America in a socialist direction? He simply wants more government.”

If it’s true that the hypothetical “coworker’s son” wants “more government,” then what for? Among other things, to support the republic — the res publica, the commonwealth — as we saw last time. I.e., the new socialism is in fact about things like “roads, welfare, and free education.” Finding a seat for those topics at the economic policy-making table is apparently a catchy idea:

“Socialism is no longer a dirty word in the US, certainly not among millennials, anyway, who face a far grimmer economic future than previous generations. It isn’t surprising that a number of recent polls show millennials are increasingly drawn to socialism and wary of capitalism.

“The popularisation of what has been termed by some as ‘millennial socialism’ in the US arguably began with the Occupy Wall Street movement in 2011. Bernie Sanders’ presidential campaign gave it further momentum, and Ocasio-Cortez’s recent win added more fuel to the fire.

“You can see this trajectory reflected in the membership of the Democratic Socialists of America (DSA). Founded in 1982, it had about 6,000 members for most of its history. Shortly after the 2016 election, the organisation saw a boom in membership, reaching 11,000 paying members in December 2016. Since Trump took power, interest in the DSA has grown exponentially. A spokesman said it hit 47,000 members last week, and has ‘seen the fastest growth in our history following the win of Ocasio-Cortez.’”

Catchy, but will it win over the hostile crowd? Aside from associations with the dictionary definition and Cold War history, “millennial socialism” is up against a more systemic, more powerful obstacle:  deeply entrenched cultural faith in the capitalist free market . We’ll look more at that next time.

[2] Never mind that the student loan business has been nationalized, as we saw previously.

Kevin Rhodes draws insight and perspective from his prior career in law, business, and consulting, from his studies in economics, psychology, neuroscience, entrepreneurship, and technology, and from personal life experience. View all posts by Kevin Rhodes

This site uses Akismet to reduce spam. Learn how your comment data is processed.

Follow The New Economy and the Future of Work on WordPress.com