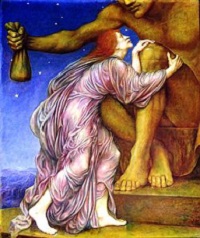 1909 painting The Worship of Mammon by Evelyn De Morgan.
https://en.wikipedia.org/wiki/Mammon

We saw last time that Milton Friedman and his colleagues at the Chicago School of Economics promoted the free market with fundamentalist zeal — an approach to economics that Joseph Stiglitz said was based on “religious belief.” Turns out that using religious-sounding language to talk about believing in capitalism isn’t as farfetched as it sounds on first hearing.

In the history of ideas, the “Disenchantment” refers to the idea that the Enlightenment ushered in an era when scientific knowledge would displace religious and philosophical belief. Reason, rationality, and objectivity would make the world less magical, spiritual, and subjective, and therefore “disenchanted.” You don’t need to know much history to know the Disenchantment never really played out — at least, certainly not in America.

“Each of us is on a spectrum somewhere between the poles of rational and irrational. We all have hunches we can’t prove and superstitions that make no sense. What’s problematic is going overboard—letting the subjective entirely override the objective; thinking and acting as if opinions and feelings are just as true as facts. The American experiment, the original embodiment of the great Enlightenment idea of intellectual freedom, whereby every individual is welcome to believe anything she wishes, has metastasized out of control. In America nowadays, those more exciting parts of the Enlightenment idea have swamped the sober, rational, empirical parts. Little by little for centuries, then more and more and faster and faster during the past half century, we Americans have given ourselves over to all kinds of magical thinking, anything-goes relativism, and belief in fanciful explanation—small and large fantasies that console or thrill or terrify us. And most of us haven’t realized how far-reaching our strange new normal has become.

“The short answer is because we’re Americans—because being American means we can believe anything we want; that our beliefs are equal or superior to anyone else’s, experts be damned.

“America was created by true believers and passionate dreamers, and by hucksters and their suckers, which made America successful—but also by a people uniquely susceptible to fantasy, as epitomized by everything from Salem’s hunting witches to Joseph Smith’s creating Mormonism, from P. T. Barnum to speaking in tongues, from Hollywood to Scientology to conspiracy theories, from Walt Disney to Billy Graham to Ronald Reagan to Oprah Winfrey to Trump. In other words: Mix epic individualism with extreme religion; mix show business with everything else; let all that ferment for a few centuries; then run it through the anything-goes ’60s and the internet age. The result is the America we inhabit today, with reality and fantasy weirdly and dangerously blurred and commingled.”

Villanova professor Eugene McCarraher makes the case that capitalism stepped up to fill the belief void created by Disenchantment enthusiasts, and became the new world religion.

“Perhaps the grandest tale of capitalist modernity is entitled ‘The Disenchantment of the World’. Crystallised in the work of Max Weber but eloquently anticipated by Karl Marx, the story goes something like this: before the advent of capitalism, people believed that the world was enchanted, pervaded by mysterious, incalculable forces that ruled and animated the cosmos. Gods, spirits and other supernatural beings infused the material world, anchoring the most sublime and ultimate values in the ontological architecture of the Universe.

“In premodern Europe, Catholic Christianity epitomised enchantment in its sacramental cosmology and rituals, in which matter could serve as a conduit or mediator of God’s immeasurable grace. But as Calvinism, science and especially capitalism eroded this sacramental worldview, matter became nothing more than dumb, inert and manipulable stuff, disenchanted raw material open to the discovery of scientists, the mastery of technicians, and the exploitation of merchants and industrialists.

“Discredited in the course of enlightenment, the enchanted cosmos either withered into historical oblivion or went into the exile of private belief in liberal democracies…. With slight variations, ‘The Disenchantment of the World’ is the orthodox account of the birth and denouement of modernity, certified not only by secular intellectuals but by the religious intelligentsia as well.”

Mammon:  Far from representing rationality and logic, capitalism is modernity’s most beguiling and dangerous form of enchantment, Aeon Magazine (Oct. 22, 2019)

Prof. McCarraher develops his ideas further in his book The Enchantments of Mammon: How Capitalism Became the Religion of Modernity (2019). This is from the Amazon book blurb:

“If socialists and Wall Street bankers can agree on anything, it is the extreme rationalism of capital. At least since Max Weber, capitalism has been understood as part of the “disenchantment” of the world, stripping material objects and social relations of their mystery and sacredness. Ignoring the motive force of the spirit, capitalism rejects the awe-inspiring divine for the economics of supply and demand.

“Eugene McCarraher challenges this conventional view. Capitalism, he argues, is full of sacrament, whether or not it is acknowledged. Capitalist enchantment first flowered in the fields and factories of England and was brought to America by Puritans and evangelicals whose doctrine made ample room for industry and profit. Later, the corporation was mystically animated with human personhood, to preside over the Fordist endeavor to build a heavenly city of mechanized production and communion. By the twenty-first century, capitalism has become thoroughly enchanted by the neoliberal deification of ‘the market.’”

Economic theories — capitalism, Marxism, socialism — are ideologies:  they’re based on ideas that can’t be proven scientifically; they require belief. The reason thinkers like Kurt Andersen and Eugene McCarraher both use the term “dangerous” in connection with economic belief is because of the fundamentalist dynamics that invariably accompany ideological belief, secular or otherwise. We’ll look at that next time.

[1] The book is another case of American history as we never learned it. For the shorter version, see this Atlantic article.