Not only can’t the rich save the world, but philanthrocapitalism is a ruse to keep the rest of us in our place says former New York Times columnist Anand Giridharadas in Winners Take All: The Elite Charade of Changing the World (2019). The Amazon book blurb calls it “the New York Times bestselling, groundbreaking investigation of how the global elite’s efforts to ‘change the world’ preserve the status quo and obscure their role in causing the problems they later seek to solve.”

This edited extract from the book begins with a recitation of the same economic trends we’ve been following for the past two years in this blog — essentially how the equitable, “floats all boats” neoliberal years melted down in the past four decades of runaway economic inequality. After that, the book’s argument sorts itself into two main points:  however praiseworthy “doing well by doing good” may be, (1) it perpetuates inequality, and (2) it’s taking place off the government ledger, and that’s not how democracy is supposed to work:

“In recent years a great many fortunate Americans have also tried … something both laudable and self-serving: they have tried to help by taking ownership of the problem. All around us, the winners in our highly inequitable status quo declare themselves partisans of change. They know the problem, and they want to be part of the solution. Actually, they want to lead the search for solutions. They believe their solutions deserve to be at the forefront of social change. They may join or support movements initiated by ordinary people looking to fix aspects of their society. More often, though, these elites start initiatives of their own, taking on social change as though it were just another stock in their portfolio or corporation to restructure.

“For the most part, these initiatives are not democratic, nor do they reflect collective problem-solving or universal solutions. Rather, they favour the use of the private sector and its charitable spoils, the market way of looking at things, and the bypassing of government. They reflect a highly influential view that the winners of an unjust status quo – and the tools and mentalities and values that helped them win – are the secret to redressing the injustices. Those at greatest risk of being resented in an age of inequality are thereby recast as our saviours….

“This genre of elites believes and promotes the idea that social change should be pursued principally through the free market and voluntary action, not public life and the law and the reform of the systems that people share in common; that it should be supervised by the winners of capitalism and their allies, and not be antagonistic to their needs; and that the biggest beneficiaries of the status quo should play a leading role in the status quo’s reform.

“This is what I call MarketWorld – an ascendant power elite defined by the concurrent drives to do well and do good, to change the world while also profiting from the status quo.

“The elites of MarketWorld often speak in a language of ‘changing the world’ and ‘making the world a better place’ – language more typically associated with protest barricades than ski resorts. Yet we are left with the inescapable fact that even as these elites have done much to help, they have continued to hoard the overwhelming share of progress, the average American’s life has scarcely improved.”

The New Elites’ Phoney Crusade to Save the World Without Changing Anything, The Guardian (Jan. 22, 2019).

MarketWorld is about putting the fox in charge of the chicken coop; or, as Giridharadas says it, “ the people who broke the progress machine are trying to sell us their services as repairmen.” That’s exactly the point is the rejoinder of the philanthrocapitalist movement, and thus we have yet one more case of polarized assumptions and opinions talking past each other. There’s plenty more where that came from — for example:

The Prosperity Movie’s website declares “It’s not just a movie. It’s a movement.”

“The businesses we showcased in the film are only a handful of the thousands of new and existing companies who are actively trying to make changes in the world around us.

“The challenge we face is simple. We can’t predict the future, but we can help make choices that turn us in the right direction.

“We could feature something cool a company is doing today and, tomorrow they can go off the rails and do something bad.

“Our goal is not to endorse specific companies, but rather reward ANY company making an effort and showing good behavior. Let’s come together and encourage them to continue doing good things… and reward them for that.”

There’s a lot of “good” and “right” and “bad” in that blurb. Says who? On the other side, the title of this op-ed piece tells you all you need to know about its bias:  Tech Capitalists Won’t Fix The World’s Problems — Their Unionised Workforce Might.

So, one more time with feeling:  Can the rich save the world?

It depends who you ask. 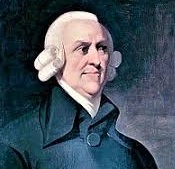 “For while Smith might be publicly lauded by those who put their faith in private capitalist enterprise, and who decry the state as the chief threat to liberty and prosperity, the real Adam Smith painted a rather different picture. According to Smith, the most pressing dangers came not from the state acting alone, but the state when captured by merchant elites.

“Political actors, Smith claimed, were liable to be swept up by a ‘spirit of system’, which made them fall in love with abstract plans, which they hoped would introduce sweeping beneficial reform. Usually the motivations behind these plans were perfectly noble: a genuine desire to improve society. The problem, however, was that the ‘spirit of system’ blinded individuals to the harsh complexities of real-world change.

“What Smith is saying is that … the ‘spirit of system’ infects politicians with a messianic moral certainty that their reforms are so necessary and justified that almost any price is worth paying to achieve them.”

Smith had little faith in the free market’s altruism:

“Smith was, however, deeply pessimistic about the stranglehold that the merchants had managed to exert over European politics, and despaired of it ever being loosened. Accordingly, he labelled his preferred alternative – of liberal markets generating wealth to be passed on to all members of society – a ‘Utopia’ that would never come to pass.”[1]

Today’s “philanthrocapitalists” would beg to differ. Their social and economic charter originated in the 1990’s, under President Clinton’s leadership. Post-WWII neoliberalism had begun to fatigue in the 70’s, and the tide had turned against the 80’s social conservatism. Clinton and his U.K. counterpart Tony Blair offered a mix of conservative economics with social liberalism:

“As much as possible, they preferred a progressive politics that channelled private initiative, and the logic of philanthrocapitalism was pleasingly straightforward. Since the rich were getting richer, they had more money to throw around. The lure of yet more lucre could now be used to steer them into sinking some of this new wealth into the poorest communities, something touted by Clinton late in his presidency when he went on a four-day ‘new markets’ tour of deprived American neighbourhoods. Urging the super-rich to do some good with a portion of their rapidly growing prosperity, Clinton told them that a better world would make them richer yet. ‘Every time we hire a young person off the street in Watts and give him or her a better future,’ he said, ‘we are helping people who live in the ritziest suburb in America to continue to enjoy a rising stock market.’”

The rich and famous jumped on board, and the rest of the 90’s into the 2000’s, private foundations were a growth industry. The Economist’s Matthew Bishop and development pro Michael Green  wrote the book on the topic, with a foreword from Bill Clinton:  Philanthrocapitalism: How Giving Can Save the World (2009). The book blurb captured the spirit of the approach and the times:

“For philanthropists of the past, charity was often a matter of simply giving money away. For the philanthrocapitalists – the new generation of billionaires who are reshaping the way they give – it’s like business. Largely trained in the corporate world, these “social investors” are using big-business-style strategies and expecting results and accountability to match. Bill Gates, the world’s richest man, is leading the way: he has promised his entire fortune to finding a cure for the diseases that kill millions of children in the poorest countries in the world.

“In Philanthrocapitalism, Matthew Bishop and Michael Green examine this new movement and its implications. Proceeding from interviews with some of the most powerful people on the planet―including Gates, Bill Clinton, George Soros, Angelina Jolie, and Bono, among others―they show how a web of wealthy, motivated donors has set out to change the world. Their results will have huge implications: In a climate resistant to government spending on social causes, their focused donations may be the greatest force for societal change in our world, and a source of political controversy.”

Maybe philanthrocapitalism’s greatest appeal was that it offered a fresh, inspiring story:

“At heart, philanthrocapitalism offered not a new science of development, but an old-fashioned moral tale – one in which a hero, who would reveal himself by some magnificent achievement, would come along to save us from some peril.”[3]

Everybody loves a great story, but does this one have a happy ending?

We’ll look at that next time.

[1] Id. For more, journalist and social commentator Chris Hedges thoroughly and adamantly deconstructs and debunks secular and religious utopian thinking in his book I Don’t Believe in Atheists, which he wrote after debating Sam Harris and Christopher Hitchens — two of the “four horsemen” of the “new atheism.” His analysis explains why utopias invariably crash into dystopias. If that topic interests you, I’ve been writing about it in my Iconoclas.blog, and you might like to check it out.

[2] The author is John Rapley, academician, world development expert, journalist, and government advisor. His latest book is  Twilight of the Money Gods: Economics as a Religion and How it all Went Wrong (2017).