Now that we’ve looked at various individual current trends and projected them into a vision of the future of law, what’s the meta of them? What’s the big picture?

Our futurist approach has been mostly based on trend analysis:  seeing what already is, then guessing where it’s going, meanwhile keeping in mind that we are not passive recipients of the future, but powerful agents of its creation.

If we want to be, that is. If we make the effort.

Some of us want to be, and will. People in this group will engage with the dynamics of change deliberately, consciously, intentionally, mindfully — taking action to shape current trends into the future they want.

Some of us don’t want to be, and won’t. This group will be the change resistors, daring those responsible for disruptive innovation to prove that the trends represent change for the better as the resistors judge it to be.

The first group will feel the energy of personal and cultural transformation moving through themselves and their lives. The second group will wonder what ever happened to the world they once knew. Together, both groups will create what Thomas Kuhn called the state of incommensurability between old and new legal paradigms

Regardless of our response, the future is ours, whether we choose to advance or resist it.

All this will happen on countless individual stages, but what’s the big show that will play out on the biggest stage? What’s the meta of the future of law?

The answer lies in the nature of the law itself. The law is itself a meta-reality — one of those gigantic, archetypal organizing principles of human life. The law enfolds and expresses our humanity, creates cultural and societal and national context. Those who live and work in the law are unavoidably its guardians and tutors, stewards and caretakers. We will create the law’s future, one way or another.

When we create the law, we shape and guide our humanity.

When we do that, we create our world.

And most of all, we create ourselves.

The law:  our humanity, our world, ourselves. There’s a lot at stake here. May we craft the future with care.

“A new scientific truth does not triumph by convincing its opponents and making them see the light, but rather because its opponents eventually die, and a new generation grows up that is familiar with it.”

Max Planck, founder of quantum theory,
in his Scientific Autobiography and Other Papers

Max Planck’s comment is right in line with what we learned last time from physicist Thomas Kuhn’s seminal work The Structure of Scientific Revolutions about how paradigm shifts come to be adopted. Kuhn also speculated that it takes a full generation for a paradigm to shift.

How long is a generation?  This blog post from biological anthropologist Greg Laden provides a pithy answer:

“Short Answer: 25 years, but a generation ago it was 20 years.
“Long answer: It depends on what you mean by generation.”

(The post continues with an entertaining and informative commentary. It’s short, and worth a read.)

If these three scientists are correct, then the trends we’ve been looking at in this series will take another 20-25 years to become the law’s “new normal.” That can make us feel either impatient or complacent, but before we get too settled in our position, we might keep in mind the lessons of this year end 2010 New York Times article that points out that we often envision the new normal by extrapolating from the recent past, which makes for a lousy planning strategy. Why? Because we don’t take into account a simple, game-changing factor:

The element of surprise.

Many of the predictions made in this series are surprising, to be sure, but even more surprising is that these things are already happening but many of us just aren’t seeing them. Why not? Because our brains literally can’t take them in.

In this post at the end of 2014, we looked at research from the emerging field of cultural neurology that suggests our brains’ observation and cognitive faculties are so linked to our cultural context that we simply can’t see paradigm shifts when they happen. Our cultural bias blinds us. We’re caught in The Emperor’s New Clothes syndrome.

And just to make things a bit more complex, as we’ve also seen before, some trends don’t sustain their momentum, and some paradigms never shift for lack of a following. Which is why passivity doesn’t serve us in times of great change.

What’s the alternative? We can position ourselves to be surprise makers instead of surprise takers. We can grab the new paradigm and run with it, and in so doing help to shape it the way we’d like.

We’ll talk next time about how we can do that.

Well, for one thing, the future is already here. The signs of it are everywhere; this blog has been looking at them for a couple years. But for another, we’re talking about a paradigm shift here — a major change in perception and operative dynamics. Paradigm shifts don’t become the new normal until a critical mass of recognition has been reached.

Physicist and philosopher Thomas Kuhn introduced the term “paradigm shift” 53 years ago. His work was itself a paradigm shift in how we view the dynamics of change:

“[Kuhn’s] vision has revolutionized the way we think about science, and has given us as well a new way to look at change in all of life.”

From this paper published in the early days of the internet (circa. 1992) by Prof. Tim Healy, Santa Clara University

Kuhn created what has come to be known as the Kuhn Cycle to describe how new paradigms replace old ones. Here’s a schematic from an article on Thwink.org, which introduces the cycle as follows: 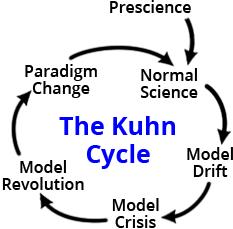 “The Kuhn Cycle is a simple cycle of progress described by Thomas Kuhn in 1962 in his seminal work The Structure of Scientific Revolutions. In Structure Kuhn challenged the world’s current conception of science, which was that it was a steady progression of the accumulation of new ideas. In a brilliant series of reviews of past major scientific advances, Kuhn showed this viewpoint was wrong. Science advanced the most by occasional revolutionary explosions of new knowledge, each revolution triggered by introduction of new ways of thought so large they must be called new paradigms. From Kuhn’s work came the popular use of terms like “paradigm,” “paradigm shift,” and “paradigm change.””

Kuhn used the term incommensurability to describe the clash of old and new paradigms:

“People and systems resist change. They change only when forced to or when the change offers a strong advantage. If a person or system is biased toward its present paradigm, then a new paradigm is seen as inferior, even though it may be better. This bias can run so deep that two paradigms are incommensurate. They are incomparable because each side uses their own paradigm’s rules to judge the other paradigm. People talk past each other. Each side can “prove” their paradigm is better.

“Writing in his chapter on The Resolution of Revolutions, Thomas Kuhn states that:

“If there were but one set of scientific problems, one world within which to work on them, and one set of standards for their solution, paradigm competition might be settled more or less routinely by some process like counting the number of problems solved by each.

“But in fact these conditions are never met. The proponents of competing paradigms are always at least slightly at cross-purposes. Neither side will grant all the non-empirical assumptions that the other needs in order to make its case.

“Though each may hope to convert the other to his way of seeing his science and its problems, neither may hope to prove his case. The competition between paradigms is not the sort of battle that can be solved by proofs.”

Or, as science historian James Gleick said in his bestseller Chaos:  The Making of a New Science, “Ideas that require people to reorganize their picture of the world provoke hostility.”